Rocky Rothwell and Mark Ring, both from Stradbally, and Murt Fennelly from Ballinakill (seated) who worked as volunteers at the Disabled Campsite during this year’s Electric Picnic. 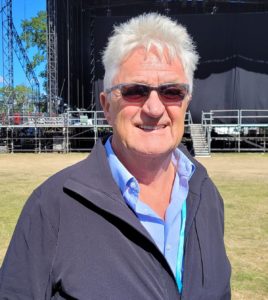 Despite several complaints about this year’s layout of disabled camping and parking facilities at this year’s event, Electric Picnic Festival Director Melvin Benn said, “Anything can always be better. I’m very happy with it. 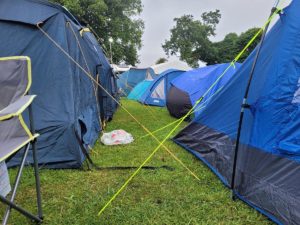 A photo of some of the tents that have been pitched in the electric picnic disabled camping area this year. 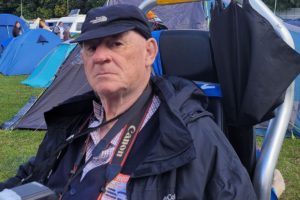 Jim Fennelly of Abbeyleix said this year’s disabled camping layout at the Electric Picnic “was not a suitable place for a disabled person“.

The handicapped camping and parking areas at this year’s picnic were a complete and dangerous disaster.

This was just one of many demands from people with disabilities who spoke with the Nationalist Laois about what they called “the terribly dangerous layout of the camping area”.

For wheelchair user Jim Fennelly from Abbeyleix, this year’s campsite layout “was not a suitable place for a disabled person”.

The Nationalist Laois was told by an Electric Picnic staff member that they had received 254 requests from people with disabilities to camp at the specially adopted campsite. The staff member said the festival production section of the event said the area was capable of accommodating 300 tents. The staff member went on to say that by 4 p.m. Friday, the first of the three-day festival, 80 to 90 people had pitched their tents and the campsite and designated parking lot were full. Another area adjoining the site had to be opened up where up to 60 other disabled people had to set up camp for the weekend and people were directed further along the Timahoe to park their cars.

One woman, who is physically disabled, recounted that she “had to walk about a quarter of a mile with my tent from the parking lot on her back to get into the handicapped area and then had to walk four more back and forths to get my stuff from my car. It wasn’t fair. Someone got it horribly wrong this year.

Mr Fennelly said: ‘It was terrible how all the tents were piled up on top of each other. I saw two little girls who had obvious disabilities make their way around the tents and one fell on the guy lines of the tents. People with disabilities shouldn’t have to do this. There were tripping hazards everywhere. The place was poorly organized. People with physical and visual disabilities found it difficult to move around the campsite during the day, let alone at night. There were health and safety issues here.

Another woman who brought her adult son with special needs said, “Disabled people have enough difficulty. But the way the tents were on top of each other my son felt very anxious. They’ve had nearly three years to curate the site, but they’ve made a full bag of it.

When asked if there were any plans to expand the disabled camping area and complaints about health and safety issues in the campsite, festival director Melvin Benn said: ‘It was built for the number of people who signed up. There is no doubt that we will help as many people with disabilities as needed. It (disabled campsite) is expandable or can be reduced.

Asked by the Nationalist Laois if he had gone to see the site and was he satisfied with it. Mr Benn said he did and thought: ‘That was pretty decent. Everything can always be better. I’m very happy with it.

It wasn’t all complaints about the campsite as the vast majority of people using it praised all the volunteer staff who helped them over the weekend. Particular praise went to Rocky Rothwell, Mark Ring of Stradbally and Murt Fennelly of Ballinakill. The three helped pitch tents, provide tea, coffee and cookies sponsored by KTC Safety Portlaoise Cake Bakery, Supervalu, Stradbally and Comerfords. They also drove the shuttle buggy from the venue to the main arena.