A Morgantown Chanticleer cocktail glass from the 1940s pairs well with a Heisey Rooster cocktail shaker from a similar vintage. Figurative barware, like these, remains popular with collectors. SCOTT SIMMONS / FLORIDA WEEKLY

This is the age of the cocktail.

Like James Bond, we prefer our drinks shaken, not stirred.

Bartenders are the stars of restaurants across the country.

Ten or more years ago, I might have expected to be served a glass of champagne or wine at a reception (white wine if there was a light colored carpet under the feet).

But when I recently attended a reception at the Flagler Museum in Palm Beach, our hosts greeted us with the choice of a Tom Collins or a Mai Tai, plus they had a full bar.

The Tom Collins was a refreshing cocktail from the Golden Age, where Henry Flagler came from. It was concocted in 1876 by Jerry Thomas, the “father of American mixology”, using gin, lemon juice, sugar and sparkling water.

Mai Tai, made with rum, Curaçao liqueur, orgeat syrup and lime juice, was born out of the tiki culture of post-war America. Although the bars have themes inspired by South Pacific cultures, the ingredients are derived from the Caribbean. They were often served in tiki-themed glasses or ceramic tumblers. 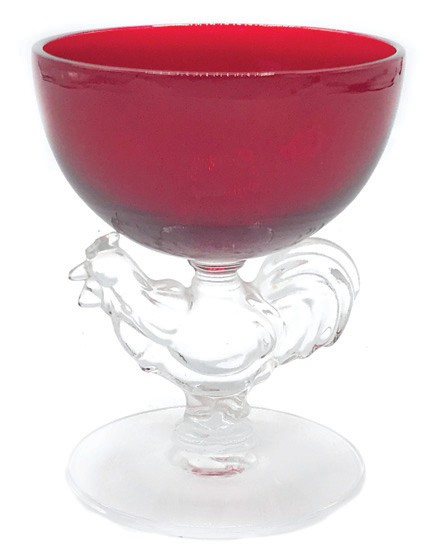 America, it seems, is a melting pot – even in its cocktails.

The nation has also been an innovator in the barware it has created to serve them.

Alcohol was the salvation of American glass makers, who were struggling during the Great Depression.

Prohibition, ending the legal sale of alcohol, was enacted in 1920.

With the repeal of Prohibition, this meant a demand for drinking glasses – Cambridge Glass Co. catalogs from the mid-1930s display page after page of cordial and saucer champagne stems, cocktail glasses and more. The Fenton Glass Co. of West Virginia even dubbed its Plymouth design “Repeal Articles.” The repeal literally saved many of these businesses.

And along the way, they got inventive, creating cocktail shakers, figural glasses and other barware.

Here’s something to brag about: Chanticleer, the rooster of medieval folklore whose vanity nearly cost him his life, has become the star of many of these rooster-themed cocktail lines. 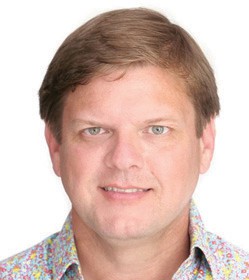 Heisey, of Newark, Ohio, has made thousands of rooster-themed cocktail shakers and glasses.

The rooster’s head served as a stopper for the shaker. A whole chicken body, with an elongated tail, served as stems on the glasses.

The Morgantown Glass Co. has used the outline of an Art Deco-inspired rooster as the stem on some of its figural cocktail glasses. Morgantown also created a line of jockey rods for Gulfstream Park in Hallandale that are now highly sought after, as well as its Top Hat line, originally created for the Knickerbocker Hotel — they feature a rod depicting a man’s head wearing a top hat. form — very elegant.

The finer glassware companies weren’t the only ones creating funky stemware – Libbey, Hazel-Atlas and other utilitarian glassware makers also produced inventive items that are now fashionable collectibles. Many of them had drink recipes incorporated into their designs and other whimsical designs.

American appetites were big back then, but not as big as they are today – many of those early martini and cocktail glasses were much smaller than what we’re used to now, often holding only a few ounces. of alcohol. But Todd Haase, an interior designer from West Palm Beach-New York, told me a few years ago that these little vintage cocktail glasses were selling well in the Big Apple.

The other barware – fun and quirky cocktail shakers, martini pitchers and ice buckets transcend time and are well worth seeking out.

Be sure to keep an eye out for them the next time you visit an antique or vintage store. Chances are they are affordable and better made than what you might buy new.

I’ll raise my glass to that any day now. ¦