Ritual slaughter of the Mro ethnic group continues among some

Min Tun — In the village of Vann Vi, part of Ponnagyun Township in Rakhine State, the Mro people are preparing for an ancient ritual massacre.

The village is home to some 400 people of the Mro ethnic group, who belong to one of the oldest tribes in western Myanmar. Long ago, the Mro were animists and practiced popular religion. Today the majority is Buddhist, with a smaller Christian population.

The Mro who practice Buddhism still maintain the tribal ritual of offering a sacrificial bull to their traditional nat, or guardian spirit.

Usually, the ritual is performed on the occasion of a housewarming party; ear piercing for young girls; wedding receptions; or when someone is sick. Or, when an expecting couple wants a baby boy.

Recently, a woman in the village of Vann Vi fell ill and the villagers were preparing to perform the ritual slaughter to offer a sacrificial bull to the guardian spirit, which is traditionally believed to protect the farmlands of the Mro people.

“It is our tradition. And I helped out because it is our ritual. Everyone in the village participates in this ritual,” U Aung Htwee said proudly.

Together with his fellow male villagers, U Aung Htwee cut bamboo from a nearby mountainside. They then built a platform attached to the patient’s house. The fact that they worked together to perform rituals that marked their respect for tradition and unity among tribal peoples stood out, at least to some. 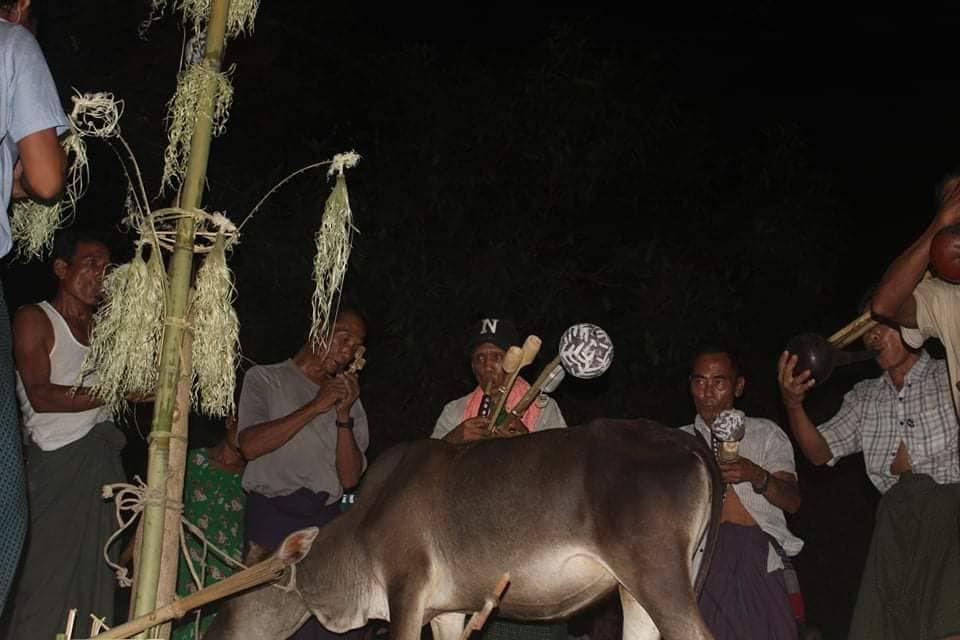 “We perform this ritual according to our faith. It is a tradition passed down from our ancestors,” said Chairman U Zani Phyu of the Mro Literature and Culture Association.

The Mro believe that the ritual promotes the health and wealth of families. The ritual can be performed at any time, regardless of weather and time. Normally, the ritual takes place for three days, accompanied by traditional dance and music. 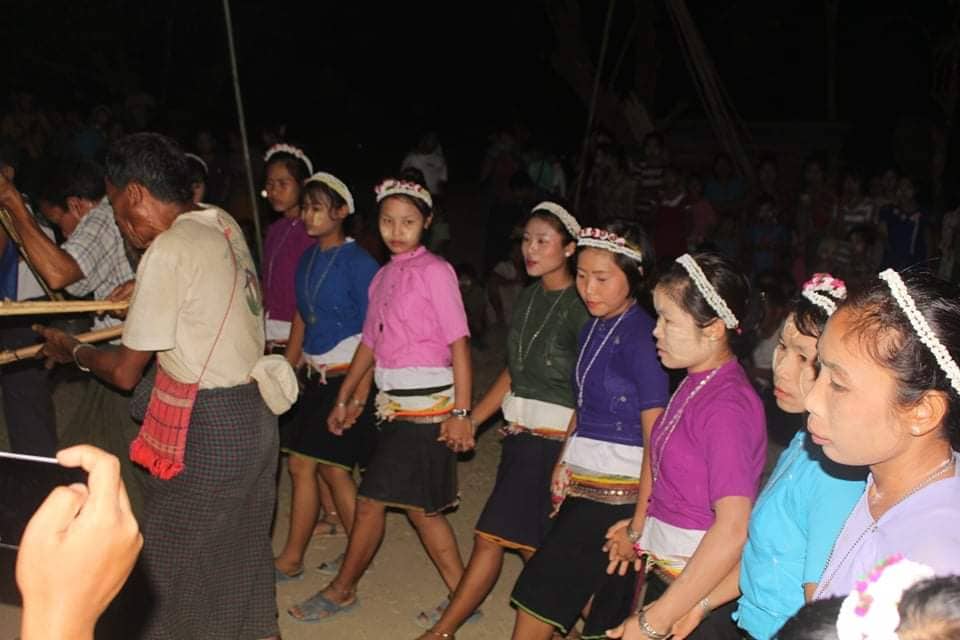 The ears of the killed pig are then cut off, tied with string and carried by family members for protection.

Then a crown is erected in the middle of the village to attach an ox to it. That evening, traditional Mro dance troupes play traditional instruments and dance the night away around a wreath attached to a cow. 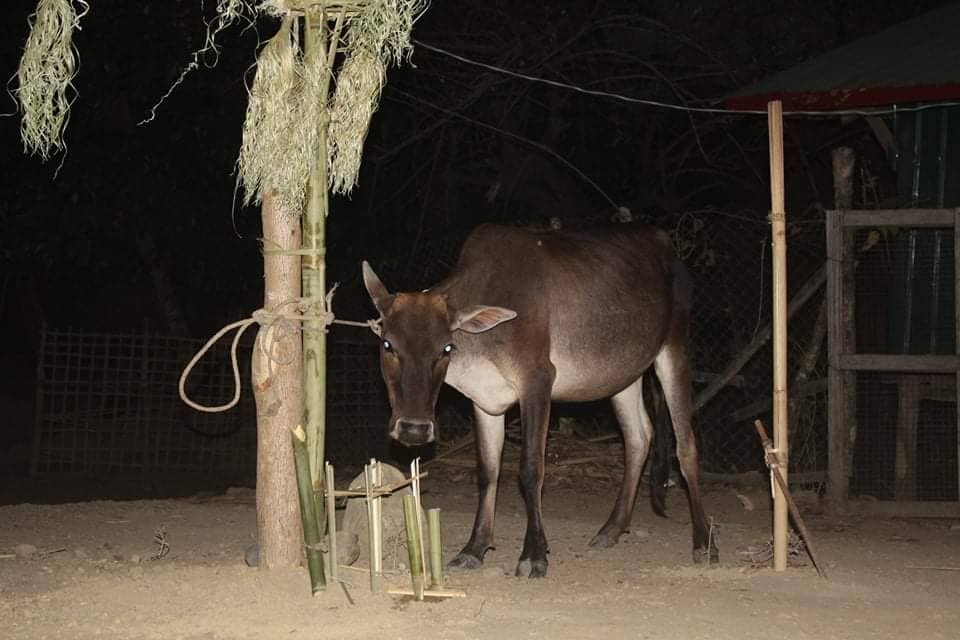 On the third day, the tethered ox is slaughtered with a spear and taken to a traditional mausoleum built in the host’s house, where it is cooked according to Mro tradition and served to the assembled mourners/celebrants.

But the ritual slaughter of the Mro tribe, which has been celebrated for generations, has not taken place for more than a decade due to poverty and regional instability, according to the Association of Literature and Mro culture.

“Now the traditional ritual slaughter is celebrated again. People also want to have this festival to preserve the tradition. This event is our cultural heritage and cannot be lost,” said U Zani Phyu, president of the Association of Mro literature and culture.

The Mro tribe, with a population of only a few tens of thousands, is mainly engaged in farming and agriculture. Due to the Mro ethnic group often living in remote mountainous areas, their access to education and employment is limited and their knowledge of the outside world remains low. 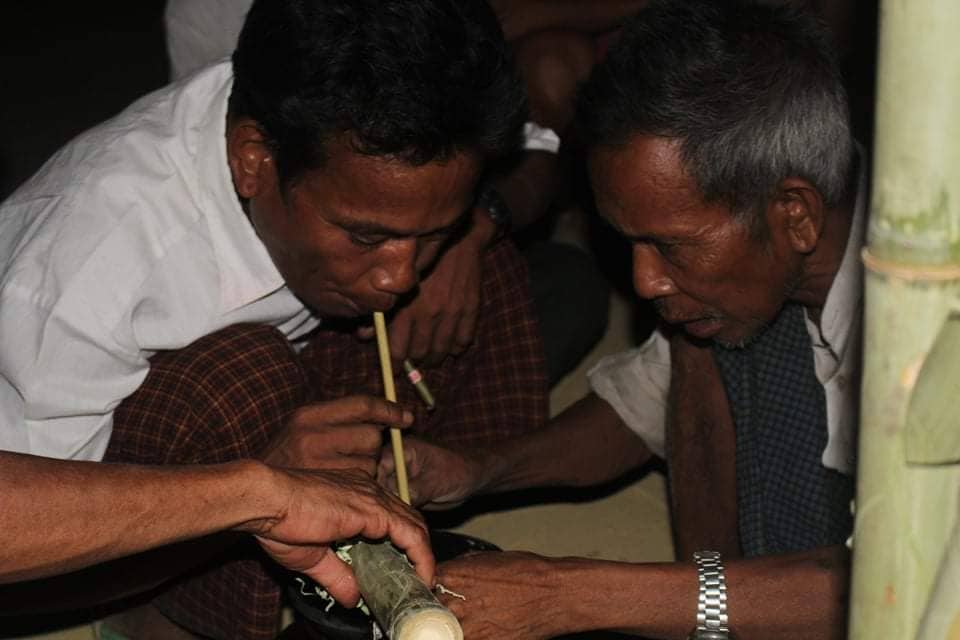 The Mro people also have their own language, literature and traditional music. Traditional ritual slaughter is just one of many Mro cultural traditions.

“Traditional ritual slaughter is our tradition. We must preserve these traditional practices,” he said.

Nonetheless, U Aung Htwe, a Mro ethnic man, is glad that a traditional heritage event is still celebrated, even on a limited scale.

“At first I was afraid that one of my traditions would disappear,” he said. “Over the years, we’ve slowly preserved our tradition, and now I enjoy dancing with the adults as much as I used to.”