UFOs Disabled Nuclear Weapons In My Top Secret Base

A FORMER Air Force officer who claims UFOs disabled nukes at a nuclear weapons base has accused the Pentagon of a cover-up – and wants to tell Congress the TRUTH.

Robert Salas – who insists he witnessed 10 nuclear weapons being taken offline – said he was “shocked” that US military officials did not investigate.

He was speaking after Scott Bray, the deputy director of Navy Intelligence, admitted that the Unidentified Aerial Phenomena (UAP) task force had not looked into what had happened.

Congress held a public hearing on UFOs — or UAPs as they are also known — with key witnesses, including Bray and Ronald Moultrie, Under Secretary of Defense for Intelligence, giving their testimony.

Salas, who was then a captain, said the bizarre incident took place in 1967, when he was the duty commander of a secret underground launch control facility at Malmstrom Air Force Base in Montana.

“Nuclear missiles have been stopped by UFOs in the space of eight days and that is well documented and there is witness testimony,” he told The Sun Online. 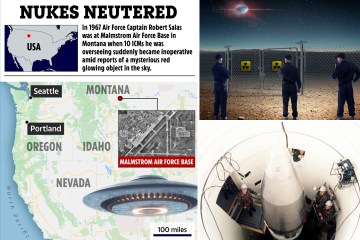 “The main witnesses, myself included, are still alive and able to testify about this incident.

“Without a doubt, I would testify at the inquest, under oath, and bring documents in the form of audio recordings, letters, etc.”

Salas said he wanted to tell the inquiry what he called a US Air Force “cover-up” that took place.

“After the incidents happened, we were told not to talk about it, in other words, there was a cover-up.

“We were never told of causation or the attempt to find causation by the investigative teams and it was kept secret.”

He said a 1969 UFO report did not mention the Malmstrom incident because investigators never had access to information about it and did not speak to witnesses, Salas said.

“The Air Force has yet to respond to the UFO investigation that is ongoing or the incidents that I have reported – I have written in books about it.

“There is excessive secrecy surrounding all of this. There is a cover-up going on and there must be an organized group within the intelligence agencies that holds these secrets.

“He assured me that was not the case and that he had no idea what or why it happened.”

He said: ‘Such an incident happened at Malmstrom Air Force Base’ and asked the official if he was aware of it and had any comments on it.

But Bray said data about the incident was not “in the hands of the UAP task force” and he had only heard informal stories.

Seemingly surprised, Gallagher said: “It’s a pretty high profile incident. I don’t claim to be an expert on this, but it’s out there.

“You’re the one investigating it, I mean who else is doing it.”

Salas said he “was shocked because I sent documents and details about my story to the inspector general of the UAP task force last year.”

After a request from Gallagher, Moultrie, the Pentagon’s top intelligence official, said he would look into the Malmstrom incident.

Bray also showed the briefing incredible UFO footage from two sightings as part of his testimony.

Security officials were forced to admit there had been 400 unexplained sightings reported by the US military.

Following the hearing, experts criticized the Pentagon for its “terrifying” ignorance of UFO sightings over nuclear facilities after admitting they had no knowledge of them.

Alejandro Rojas, a ufologist with the Scientific Coalition for UAP Studies, said the most worrying fact was the lack of historical knowledge, especially about nuclear bases – which he called a “major concern”.

Speaking to The US Sun, Rojas said: “I really thought they would hold their feet to the fire to do something, to ride, but really there was none of that. It was more just questions about what this group is going to look like.

“I still don’t know if they feel the urgency to start making things happen.”

Rojas said the other main takeaways from the historical briefing were confirmation that the Pentagon had no crashed UFOs or material from them.

This goes against what whistleblower Luis Elizondo, who ran the Pentagon’s secret UFO program AATIP, has previously said.

The news follows claims by a congressman that the United States has recovered UFO wreckage.

Representative Tim Burchett – a long-time disclosure advocate – told The Sun Online that he had been informed by reliable sources that “material” had been recovered from objects or devices reported in the United States skies.

The Tennessee Republican declined to give further details as he said the information was passed to him in a “classified setting”.

“I have been informed by several sources that we have recovered something from these [crafts or objects]“, Burchett told Sun Online.